Waste management and recycling in Cyprus

When we moved here, in 1997, we were disappointed that there was no facility for recycling in Cyprus. However, we were most impressed that the dustmen came three times per week. Moreover, they would take almost anything we left out in the street, in black sacks. They would even take garden rubbish. Neighbours explained that rubbish collection had to be frequent, otherwise rats would get in the rubbish.

Eventually we discovered limited paper recycling in the Dhekelia army base, which was fine if someone was going there anyway. There were also a few containers for empty drink cans locally. But since we never buy canned or fizzy drinks, those were no use to us. And gradually, over the years, we got used to throwing away old paperwork and glass bottles.  We even started using more plastic carrier bags – given away free by the supermarkets – rather than risk the slightly puzzled stares we received when using our own cloth bags.

Then, in 2010 we learned that recycling was going to begin around the island. This was in accord with the European directives to ‘reduce, re-use, recycle’.  Metro supermarket introduced rather expensive re-usable bags  although we didn’t buy any. They also brought out recyclable plastic bags. These sounded like a good idea in theory, but unfortunately were so flimsy that we needed twice as many. Still, it was a start. 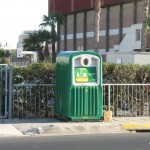 In the Autumn of 2010 we had a brochure through the door telling us that glass recycling domes were going to appear in several places. The company concerned also said that they would collect two streams of recycling from outside homes, every week.  They even gave us two free bags to encourage us to start.  One was for paper and cardboard, the other for the ‘PMD’ stream. The latter is plastic bottles, metal containers and cans, and drink containers of the Tetrapak kind.

The dustmen still come three times per week, but our household waste has reduced significantly. If only we had somewhere to make a compost heap, there would be almost nothing left to throw out.  But at least fruit and vegetable parings are bio-degradable.