Electricity has been available in Cyprus since very early in the 20th century. It is supplied by the Electricity Authority of Cyprus (EAC).

Electricity tariffs are on a scale, with higher costs per unit if customers use more than a basic amount each billing period (which is about two months).

Sadly, there was an explosion at Zygi in July 2011, which led to the tragic loss of 12 lives. It also destroyed the island’s main electricity generating source. Power cuts were scheduled for most of Cyprus during July and early August until temporary measures were taken. Then the cost of electricity started to soar in the Autumn. By the end of 2011, the first 120 units cost €16.20. By 2015, even with falling fuel prices around the world, the first 120 units cost €16.45. The authorities asked us to conserve as much electricity as possible, yet the bills climbed higher.

In 2017, the Electricity Authority introduced a new tariff system. They claimed that it would reduce bills for most customers, and our experience is that this was true. However it is considerably more complicated to understand how it works. There are detailed explanations of the new tariff system at the EAC website. 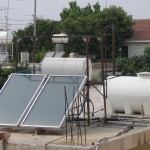 Most homes have solar panels on the roof which help towards heating water. On a sunny day from about April to October, and sometimes beyond, there is no need for any extra power for water heating. Solar energy heats the hot water tank sufficiently to provide water for showering and washing dishes.

However washing machines and dishwashers are usually plumbed into the cold water system only. So they use extra power to heat the necessary water. During the cooler part of the year, or when the day is overcast, we have to turn our electric water heater on.  It can take anything from ten minutes to an hour to provide sufficient hot water for showers.

A few people have installed full solar panels to provide all their electricity. The technology is still quite new in Cyprus, and the installation is expensive. It’s possible to have heavy batteries to store energy to use overnight. it’s also possible to link to the mains system. That means using some mains electricity when necessary, but also supplying excess to the main grid.

Electricity cables are overhead rather than buried in Cyprus. This means that installation is cheaper, but storm damage more likely. It also leads to a rather ugly skyline. There are not just water tanks and satellite dishes, but overhead cables almost everywhere. 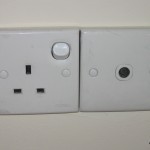 Cyprus uses the British system for plugs, with three square pins. Some homes still have older style power points. But new appliances should be fitted with the correct plugs. If not, the supplier should also provide an adapter.

You can buy most standard white goods and appliances at electrical stores or larger supermarkets. Washing machines, fridges and dishwashers are common, although tumble driers are less so. In a climate where the sun shines for about 360 days of the year, most people hang laundry out to dry.

Most kitchens now have microwave ovens, electric kettles, irons, toasters, and so on.  There are a gradually increasing number of other small appliances available too. We have, for instance, a steamer, a breadmaker, a juice extractors, and a food processor.  There is not as much choice as in the USA or UK, but far more so than when we first came here.