Each of the main towns in Cyprus has its own Water Board, and mains water can be supplied to all houses. As with electricity, the price of water is on a sliding tariff. The cost depends on use every billing period (generally three months). Currently each municipality in Cyprus determines local rates. In 2007 for instance, the first 30 cubic metres in Larnaka cost 19 cents each. The next level was significantly higher, at 43 cents per cubic metre.

At the start of 2008 Cyprus converted to the euro currency, and since then prices have gradually increased. By the end of 2009 we were paying 42 euro-cents per cubic metre for the first 30 used, and 97 euro-cents for the next level. By the end of 2013, it had more than doubled again. However that price has remained steady. In 2017 we were paying 90 euro cents for the first 15 cubic metres. The next 15 cubic metres is a euro each, so not much higher. 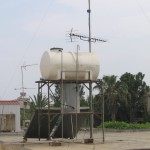 Most houses have both a cold and a hot water storage tank. These are generally on the roof or on a roof-high structure next to the house, to provide sufficient pressure. These tanks hold plenty of water to last an average family for at least a couple of days, if used sensibly.

Solar power heats the hot water during the summer months, or indeed any time when the sun is shining. There is usually some form of electrical immersion or other backup heating system for overcast days. 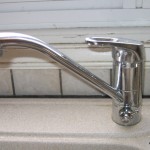 The kitchens usually have with hot and cold water taps that use water from the tanks. They also often have a mains water tap that gets cold water directly from the mains. This is suitable for drinking. Many people put in an additional filtering system to make the water taste better.

Water from the tanks may also be drinkable, if the tanks are new and the water is used regularly, but some homes have old and rusty water tanks, sometimes with holes that allow insects inside, so it’s not advisable to drink from them!

Lack of rainfall and water restrictions in Cyprus

Water provision is an ongoing problem in Cyprus. Lack of rainfall in recent years means that reservoirs are often only about 25% full by the end of the winter rains.  Until 2001 water was restricted. The authorities only switched on the mains water two or three times per week. People learned to keep water in bottles for drinking. We limited washing machines and garden watering to days when the water was on.

However, a de-salination plant was eventually built after a series of particularly dry winters. Since then, mains water has been on almost constantly. Inevitably this has led to people taking water for granted. There are officially hose-pipe bans and on-the-spot fines for using hoses. However many Cypriots wash their patios and even the pavement in front of their homes two or three times per week. Some leave water pouring out of hoses.

After two more dry winters, water restrictions were introduced again at the end of March 2008, with mains water on for about 12 hours in every 48. This eased in January 2010 after one of the wettest winters on record, but water is still considred a valuable commodity in Cyprus.

The water boards are slowly introducing mains drainage, in line with European regulations. At present many houses have septic tanks rather than being connected to the mains for waste water. However in our neighbourhood, the mains system is almost complete, after about five years. We should soon be connected.  In addition to the quarterly water bills, we have an annual sewarage/drainage bill of about €60 per person.

For more information about some of the individual water boards, you can visit their sites: Larnaka water board or Limassol water board.