Cyprus has fairly clear seasons, on the whole. However Summer in Cyprus can seem extremely long to someone used to a milder climate. Still, widespread (and relatively inexpensive) air conditioning has made life much more pleasant in the hot, humid summers, in the past ten years or so. Tourists arrive in their thousands, usually from cooler climes. They are mostly looking for the guaranteed sunshine that this small island can offer during the summer months.

The start of June is usually the beginning of real Summer in Cyprus.   We switch from wearing jeans to shorts; we put the duvets away and use just sheets or duvet covers on the beds at night.  Rain is very unlikely from June until at least September, though not impossible.   By mid-June we reluctantly switch the air conditioning on in the middle of the day, and sometimes overnight too, although it’s not as humid as later in the summer. Daytime temperatures tend to range from about 25-30C, or a little more, and night-time temperatures around 15-22C.

You can read more about what to expect in this month on the page Cyprus in June. 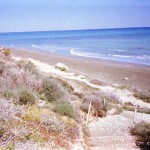 July is my least favourite month from the point of view of the weather in Cyprus. Humidity is high, sunshine is almost constant, and temperatures range from about 30-36C during the daytime, 22-28 overnight.  We switch on the air conditioning in rooms we’re using, particularly when there are computers (which don’t tolerate 30C or more). We also use air conditioning in the bedrooms at night, to reduce the humidity.

It seems that the optimum temperature to run the air conditioning is 28C (which is 82F). This makes a room comfortable for both computers and humans, and the reduction of humidity makes it feel even cooler.  A lower temperature means that going outside feels even more unpleasant, and also costs more! Many of the locals move to the mountains during the summer in Cyprus. The temperatures there are always a few degrees cooler than those at sea level, and – more significantly – there is no humidity.

You can read a bit more about this hot summer month on the page about July in Cyprus.

By August, we begin to feel as if the end is in sight… temperatures are about the same as in July, but the humidity begins to drop, and of course the days also get shorter, meaning there is less sun.  August is a perfect month for bathing in the sea in late afternoon as the shadows lengthen, when the tourists have gone back to their hotels. Many Cypriots close their businesses for a couple of weeks during August, and head for their holidays homes in the cooler mountain regions.

There’s a bit more to read about this month, and what to expect, on the page about Cyprus in August.

For a reasonably accurate ten-day forecast, the UK Weather site seems to be the best we have found. For ten-day forecasts, choose from: Larnaca weather, Nicosia weather, Paphos weather, Limassol weather or (much colder, usually) Troodos weather.